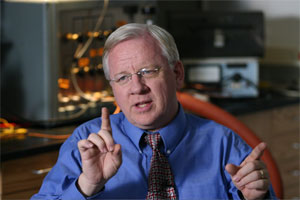 The film Improbable Collapse proceeds from an exclusive interview with Jones, a professor of physics at Brigham Young University. Jones argues that the mechanism of the building collapses proposed by US government investigators is extremely unlikely, hence the film title. This is his first film appearance on the issues he raises in his influential research paper, “Why Indeed did the WTC Buildings Collapse?” 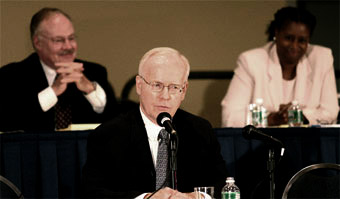 David Ray Griffin delivers testimony about the events of 9/11 at a Capitol Hill briefing to the Congressional Black Caucus, convened in August 2005 by Rep. Cynthia McKinney (right). Looking on is Michael Ruppert (left), author of Crossing the Rubicon.

David Ray Griffin is a professor emeritus in the philosophy of religion and theology at the Claremont School of Theology in California. He is a co-director of the Center for Process Studies, and one of the foremost contemporary exponents of process theology, founded on the process philosophies of Alfred North Whitehead and Charles Hartshorne. (See his Wikipedia bio.)

Griffin is also one the foremost investigators of theories that dispute the official version of the events of Sept. 11th, 2001, and of claims that the attack plot originated from within the US military-intelligence complex. He has written two books on the subject of September 11th, The New Pearl Harbor and Omissions and Distortions: The 9/11 Commission Report (a.k.a. “A Critique of the Kean-Zelikow Report”). 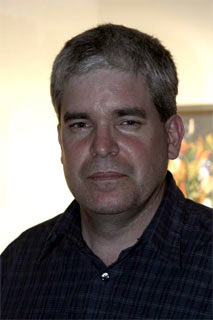 For Improbable Collapse, KEVIN RYAN agreed to grant his first film interview since he was dismissed from his executive position at Underwriters Laboratories in 2004. The dismissal followed the public release of a letter Ryan wrote to Frank Gayle, a scientist in the World Trade Center fire investigation. Ryan asked Gayle to clarify the results of a UL fire test on behalf of the National Institute for Standards and Technology (NIST). In the test, steel structures similar to those used in the WTC were subjected to furnace fires for two hours, at temperatures higher than those presumed to have been reached in the Twin Towers on September 11th. The steel of the model floor trusses withstood the test easily, Ryan learned, and according to him this raised serious concerns about the NIST collapse hypothesis. A few days later, UL fired him because of the letter, which Ryan had written as an individual. UL claimed that he had appeared to speak on behalf of the company itself.

– The first report about this incident, with the complete text of Ryan’s October 2004 letter;

– An exchange of letters concerning the firing between 911Truth.org and UL; and

More recently, Ryan has developed a critique of the NIST report in public presentations and works such as his recent paper, “Propping Up the War on Terror: Lies about the WTC by NIST and Underwriters Laboratories.”

You can find more of Kevin’s writing here.

A software engineer, Jim Hoffman has achieved breakthroughs in the application of scientific visualization to mathematics. His work in this field was featured in Science News, Scientific American and Nature. He also discovered new, three-dimensional morphologies for modeling the block co-polymers used in nanotechnology, and co-authored papers in Science and Macromolecules. He is co-author of a patent for an internal combustion engine with increased thermal efficiency. (See his Wikipedia bio) 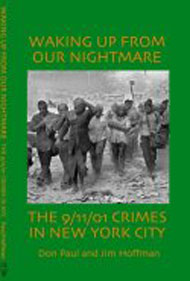 Hoffman pioneered research in the hypothesis that the WTC buildings were demolished and providing the inspiration to others who have pursued the same idea, including Steven Jones and David Ray Griffin. He is the editor of three meticulous and sprawling sites: wtc7.net, 911review.com and 911research.wtc7.net.

With Don Paul, who also appears briefly in the film, Hoffman is the co-author of Waking Up from Our Nightmare: The 9/11/01 Crimes in New York City.