“No element of the entertainment industry responded to the mass murders of 9/11 with an inquisitive mind and bold presence – except hip-hop. While many icons in the so-called alternative media have shied away from meaningful investigation into the unanswered questions about the attacks, hip-hop responded first to the scene, providing an alternative to the alternative. With the recent reporting that there is a hip-hop task force in NYPD, it’s no wonder that the hip-hop community didn’t accept the official government version of 9/11 as gospel.”

– Michael Kane on Hip Hop and the 9/11 Truth Movement 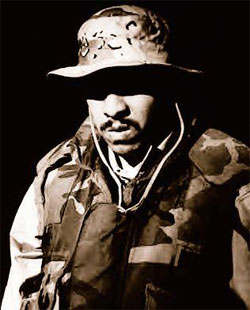 Immortal Technique is the creator of “Revolutionary” and “Revolutionary Vol. 2.” His work is produced by Viper Records in New York City. He and the label have generously allowed the use of the song, “The Cause of Death,” which sets its provocatively blunt approach to 9/11 to apocalyptic violins.

EXCERPT FROM “THE CAUSE OF DEATH”
….

Father, forgive them, for they don’t know right from wrong

The truth will set you free, written down in this song

And the song has the Cause of Death written in code

The Word of God brought to life, that’ll save ya soul…

I hacked the Pentagon for self-incriminating evidence

Marines Corps. flak vest, with the guns and ammo

Spittin’ bars like a demon stuck inside a piano

Turn a Sambo into a soldier with just one line

And now the last chapters of Revelations are coming true

Because subliminal bigotry makes you hate my politics

But you act like America wouldn’t destroy two buildings

In a country that was sponsoring bombs dropped on our children

I was watching the Towers, and though I wasn’t the closest

And they thought nobody noticed the news report that they did

About the bombs planted on the George Washington bridge

Four Non-Arabs arrested during the emergency

And then it disappeared from the news permanently

They dubbed a tape of Osama, and they said it was proof

“Jealous of our freedom,” I can’t believe you bought that excuse

Rockin a motherfucking flag don’t make you a hero

The Devil crept into Heaven, God overslept on the 7th

The New World Order was born on September 11.

And just so Conservatives don’t take it to heart

I don’t think Bush did it, ‘cuz he isn’t that smart

From the same people that sabotaged Senator Wellstone

The military industry got it poppin’ and lockin’

Looking for a way to justify the Wolfowitz Doctrine

And as a matter of fact, Rumsfeld, now that I think back

Or a Defense budget of world conquest proportions

Kill freedom of speech and revoke the right to abortions

Tax cut extortion, a blessing to the wealthy and wicked

But you still have to answer to the Armageddon you scripted

And Dick Cheney, you fuckin leech, tell them your plans

About building your pipelines through Afghanistan

And how Israeli troops trained the Taliban in Pakistan

You might have some house niggaz fooled, but I understand

Colonialism is sponsored by corporations

That’s why Halliburton gets paid to rebuild nations

Tell me the truth, I don’t scare into paralysis

I know the CIA saw Bin Laden on dialysis

Government ties is really why the Government lies

Read it yourself instead of asking the Government why