A widely accepted theory of how the WTC buildings came down blames the collapses entirely on the plane crashes and fires. The Towers were both doomed by virtue of their design once the impacts and explosions took out a number of perimeter and core columns, blew off fireproofing from key structural steel components, and touched off an inferno within the crash zones.
In reality much of the jet fuel burned off within a few minutes, igniting office contents within the towers and creating large explosions in midair.

While the fire could not melt steel, the fire did heat the steel to temperatures that would have caused it to lose strength according to the government’s hypothesis. As columns failed, the loads they held were transferred to an ever-decreasing number of remaining intact columns, until the breaking-point of all remaining columns was reached simultaneously.

In one scenario, heat caused the floor trusses to sag, pulling at the vertical columns on either side (core and perimeter) and causing a visible inward bending of the outer columns.

Collapse initiation is considered as the point when an entire floor fails and falls on to the one below. After that, in the words of Shyam Sunder, the leader of the WTC investigation sponsored by the National Institute of Standards and Technology, “gravity takes care of the rest.” Each falling floor causes the next to fail, driving a progressive failure, while also simultaneously pulverizing a large portion of the concrete. 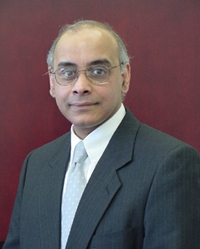 Dr. Sunder led the federal building and fire safety investigation of the World Trade Center disaster conducted in 2003-2005 by the National Institute of Standards and Technology (NIST). The graduate of MIT received a Gold Medal Award for his distinguished leadership of the project from the U.S. Department of Commerce. (Photo: NIST)
Supporters of the dominant government paradigm see little reason to model the effects after collapse initiation. The NIST study also declined to do so.
These are the ideas challenged by Steven Jones, Jim Hoffman and others who have formulated an alternative hypothesis, that explosives would have been necessary to cause the actual visible effects of the collapses.
Shouldn’t the resistance of the intact lower floors (as implied by the grinding) slow the collapse progression?
The collapse waves progressing down the length of the Towers each display an acceleration nearly equivalent to gravity, despite resistance from lower floors. Yet the same collapse process also simultaneously grinds concrete into the well-known dust cloud that poisoned the New York City first responders and lower Manhattan residents.
The skeptics have pointed to a number of other factors they say support the demolitions hypothesis (which should not be confused with a classic “controlled demolition”), such as:

Critics of the demolitions hypothesis in turn have developed arguments designed to show that each of these suspect effects are logical accompaniments to a spontaneous collapse due to plane impacts, fire and gravity. For example, they attribute the molten metal (or steel) to heat from the fires that raged at Ground Zero in the days and weeks that followed 9/11.

The pros and cons of many of these arguments are examined in Improbable Collapse.

The skeptics also make much of certain circumstantial matters:

As a result of the rapid scrapping of Ground Zero, only about 240 structural steel samples were still available for study by the time the NIST probe was authorized in 2003. Very few of these came from the impact zones, and none at all from WTC 7. Given this almost complete lack of physical evidence, many supporters of the dominant paradigm agree it may be impossible to ever definitively prove any hypothesis. (Skeptics believe the steel was ordered destroyed as an intentional destruction of the crime-scene evidence.)

Certainly there is an irony in the “needs” section of NIST’s own assessment of the available physical evidence:

Why did investigators have to go begging for the steel, as this chart implies, when there was originally so much of it?

Finally, the skeptics view the manner in which WTC 7 fell as their trump card. They have argued that if this building indeed came down due to pre-planted explosives, it could not possibly have been prepared for demolition on the day of September 11th itself. This in turn raises the issue of foreknowledge of the events, and the specter that the Towers were similarly prepared for a demolition.

After a delay of more than a year, NIST is expected to issue its final report on WTC 7 in the summer of 2006.

The would-be debunkers of the demolitions hypothesis often rely on a general dismissal that is not based in engineering, but in psychology: Who would be so evil as to plot this from within the system (as would have had to be the case)? How could they prepare the logistics without discovery, and how many people would have been involved? How would they keep the secret afterwards? And what would be the larger purpose of a demolition, if the buildings were going to be hit anyway by diverted passenger planes?